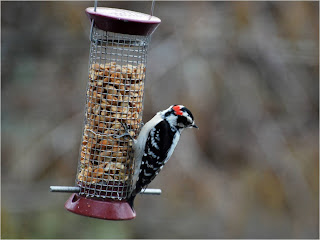 It was an interesting winter in my backyard, highlighted by three common redpolls at the thistle feeder on Super Sunday. It was the first time we'd hosted this species since moving to Glen Ellyn in 1997!

Another satisfying feeder sighting—on the peanuts, not the thistle—was a pair of hairy woodpeckers. These are not “locally rare” like redpolls but they're far from common in the neighborhood. Until February, in fact, I'd never once seen a hairy use my feeders. It was the kind of small victory that we birders tend to cherish.

This is a good time to discuss woodpeckers because April is when one of our best-named birds passes through our region, on its way north. Yes, there really is a yellow-bellied sapsucker, and now is time to watch for it.

You might see evidence of sapsuckers before you see the bird itself. The telltale sign: a grid pattern of little holes or “sap wells” etched in tree trunk or branch. Their precision woodworking doesn't usually harm the tree, but the holes may be visible for years.

The fruit of their labor, naturally, is sap, which sapsuckers consume with special tongues that have a brush-like tip. The sap attracts insects too, which are a key part of the bird’s diet. Another cool fact: the sap wells can be a food source for hummingbirds in early spring, before nectar is available.

The yellow-bellied sapsucker is one of 22 woodpecker species in North America, and among the seven you can see in DuPage County. The most common by far is the downy. Like the hairy, his larger, look-alike cousin, downy woodpeckers are non-migratory.

Downy vs. hairy is really the only significant identification challenge with the local woodpeckers. The key differentiation is bill size—tiny on the downy, prominent on the hairy. Body size is a good clue as well. If you are used to seeing downies at your feeder and suddenly a hairy flies in, you'll notice the difference. The males of both species have a red spot on their heads.

The four other woodpeckers to look for are red-bellied, Northern flicker, red-headed and pileated. I don’t see red-bellieds in my yard nearly enough, but they are increasingly common in our local woodlands. That wasn’t always the case. Traditionally a “southern woodpecker,” the range for this species has expanded northward in recent decades.

The red-bellied woodpecker, by the way, needs a better name. Its red belly is just a small pinkish area that’s not usually obvious. “Zebra-backed woodpecker” would be a lot more descriptive.

The red-headed woodpecker, which is perfectly named, is hard to find around here. While I dream that one of these striking birds will some day visit my yard, that's not very likely. Their population is sharply declining because of habitat loss; they prefer long-dead, barkless trees in open areas. Churchill Woods Forest Preserve in Glen Ellyn is worth a try if you are searching for a red-headed. When visiting Cantigny Park in Wheaton, check the trees around the First Division Museum.

Northern flickers, unlike other woodpeckers, are often seen on the ground. That's because ants are one of their favorite foods. Flickers are easy to ID in flight—look for a large patch of white on the rump. If you get a good look, the bird's yellow wing and tail linings will be evident, too.

One other woodpecker, the pileated, is considered a prize sighting in DuPage. Field guides indicate the species is possible here year-round. That's true, but actually seeing one is another story. The Chicago region just doesn't seem to hold them.

A year ago I saw my first pileated woodpecker in Illinois while birding at Waterfall Glen Forest Preserve in Darien. It was a fleeting glimpse, but there is no mistaking this species, the largest woodpecker in North America. (Assuming, very reluctantly, that the ivory-billed is extinct.)

Woodpeckers are a pleasure to observe. They are beautiful, conspicuous birds with a lot of personality. I especially like their distinctive markings and their sometimes raucous calls. If there is a red-bellied woodpecker or a flicker in your neighborhood, you'll hear it. To study woodpecker vocalizations, visit the “All About Birds” section of the Cornell Lab of Ornithology website, a terrific online resource.

Finally, another thing to appreciate about woodpeckers is the service they perform for other birds. Species such as kestrels, bluebirds and screech owls—which lack the ability to chisel out their own nesting cavities—sometimes use those created by woodpeckers.