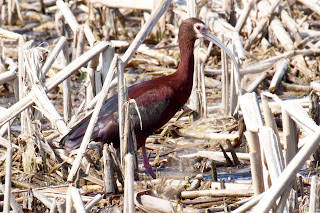 In a recent column I suggested a trip to the Horicon Marsh Birding Festival in Wisconsin. I didn’t make it to that May event, but I did visit the marsh a few weeks later, on an overnight field trip with Kane County Audubon. It was a 24-hour birdathon that I won’t soon forget.

Horicon is in farm country, about an hour northwest of Milwaukee. I’d been there just once before, by myself in 2002. This time I’d see more of the 32,000-acre marsh, and experience a bit of the small-town life that surrounds it.

It was nice to be with like-minded souls. Our group was small, just seven birders, but we had large ambitions. How many species could we find? What rarities might we see? The possibilities were exciting. And of course we looked forward to resident Horicon specialties like black tern, Forster’s tern, yellow-headed blackbird, sandhill crane, bald eagle and American white pelican.

Our party set off from Elgin, early on a Saturday morning. We reassembled about three hours later in downtown Horicon, a city of 4,000. After much-needed coffee and a late breakfast at Mother’s Day Restaurant, we headed to an observation deck and trailhead just outside of town. This spot (go north on Palmatory Street from Route 33) is a great place to start. The panoramic view from the deck introduces the massive scale of this designated “wetland of international importance.” Horicon is the largest freshwater cattail marsh in the United States.

An active purple martin colony is adjacent to the deck and parking lot, and from here we began a long, slow hike through a mix of habitats. Horicon supports far more than ducks, geese and marsh birds. It’s a haven for grassland and woodland species, too. Birds we’d see or hear included black-billed cuckoo, red-headed woodpecker, wood thrush, great-crested flycatcher and six out of six possible swallow species.

Horicon can also be a fabulous place for warbler watching in May, but we were about a week too late to catch the wave. The only warbler species we observed were the local nesters—American redstart, common yellowthroat and yellow warbler. The latter two are marsh-loving birds and proved to be constant companions throughout the weekend. Yellow warblers were positively abundant.

The same goes for marsh wrens. Their bubbly chatter was the background music for our visit, punctuated every so often by the unmistakable whinny of a calling sora. These are the sounds of a thriving wetland, and the better ears among us were able to identify another Horicon denizen, the Virginia rail. We only made eye contact with two rails all weekend, one sora and one Virginia, a testament to their stealthy lifestyles.

Eventually our post-breakfast hike led us to the new Horicon Marsh International Education Center, another good spot to enjoy an elevated view of the landscape. Completed in 2009, the center (horiconmarsh.org) offers exhibits and free maps, bird checklists and other Horicon literature. A short film in the theater gives an overview about the marsh, which has a fascinating history involving man vs. nature.

In general, nature has been winning since the late 1920s, when efforts to drain the marsh and convert it to farmland were finally abandoned. In 1927, Wisconsin established the Horicon Marsh State Wildlife Area. This occupies the southern third of the marsh and is managed by the state’s Department of Natural Resources.

In 1941, the federal government purchased the rest of the marsh, creating Horicon National Wildlife Refuge. This was our group’s next destination as we headed for the marsh’s northern boundary along Highway 49, just east of Waupun. Passing traffic aside, the roadside birding here is terrific; pullover space is more than adequate. Redhead ducks, ruddy ducks and black terns were plentiful on the north side of the road, with a few yellow-headed blackbirds in the cattails beyond the open water.

More treasures awaited on the south side on some exposed mudflats. A male ruddy turnstone in full breeding plumage was a nice discovery, and this is where we enjoyed a glimpse of that Virginia rail. We also found a black-crowned night heron and common moorhen. Here and everywhere during our visit, herons, egrets and white pelicans were never out of view.

At 6 p.m. we reported back to the village of Horicon to board a pontoon boat at Blue Heron Landing. The two-hour “birding adventure” at sunset would be a highlight of the trip, thanks in large part to professional guide Marc Zuelsdorf. Marc’s been running the tours for many years but brings a fresh enthusiasm to his work. He clearly loves Horicon Marsh and enjoys showing off its birds.

And there is always something interesting to share. Marc noted that 301 species have been documented at Horicon, and his personal Horicon life list stands at 240-plus.
Perhaps the most conspicuous Horicon resident and a favorite of many birders is the American white pelican. Marc said the first pelicans arrived at Horicon just 13 years ago, a day he recalls as if it were yesterday. Now, with up to 700 nesting pairs, this is Wisconsin’s largest nesting colony.

The return of bald eagles to Horicon is another great story. Two pairs are now nesting on the refuge. Ospreys are present, too—a nesting platform was installed just this year and is already in use.

We saw lots of birds and a dazzling sunset as Marc guided us through a main channel that’s part of the Rock River system. Everyone in our group felt the $18 ticket was a bargain. Canoe and kayak rentals are available at Blue Heron Landing as well.

A late dinner at the Rock River Tap in downtown Horicon proved that bikers and birders can easily share the same space. The service was slow, the food was just fair and the beer was cold. In other words, we were delighted. We left the joint satisfied and ready for a good night’s sleep at the Mayville Inn up the road.

Our Sunday morning birding was more targeted. We’d heard that a white-faced ibis, a western species rarely seen at Horicon, was present near Main Dike Road in the marsh’s interior. This would be a great find. The only white-faced ibis I’d ever seen was in Henderson, Nevada, at a sewage treatment plant. (Yes, we birders visit all the best places.)

Other cars on the dusty Dike Road signaled that we were not the only birders on a mission. A driver heading east as we headed west told us the ibis was up ahead and not far from the road. So too were a pair of black-necked stilts, another uncommon species.

Within minutes we were “on” the ibis, enjoying excellent close-range views as the bird foraged in some old cattail stalks. This was too easy! The stilts were in the same general area, also feeding close to the road.

With the temperature approaching 90 and no shade in sight, we decided to head back to the north end of the marsh and try the floating boardwalk trail. Parts of it pass through a woodland and it felt good to be out of the hot sun. We found a rose-breasted grosbeak and some bobolinks in a neighboring field, but our best sighting was a yellow-throated vireo at its nest.

Driving back to Glen Ellyn that afternoon, I had plenty of time to think about all the birds we saw (and a few we didn’t see) at Horicon Marsh and surrounding Dodge County. Our weekend tally was 92 species—a good outcome considering the scarcity of warbler and sparrow species. We’d have liked to see a few more rarities given that sightings of glossy ibis, American avocet and a lone whooping crane had been reported in recent days.

Horicon seems to be a magnet for special birds, like the white-faced ibis we encountered. My favorite sighting, however, was a close-range view of a male northern harrier, hunting low over a grassy field. Known to birders as the “gray ghost,” this raptor can leave a big impression on those lucky enough to see it.

Horicon itself has that effect. Go explore it for yourself, and spend a whole weekend there if you can. This is one of the Midwest’s top birding destinations, and we’re fortunate to live less than 175 miles from its boundaries.