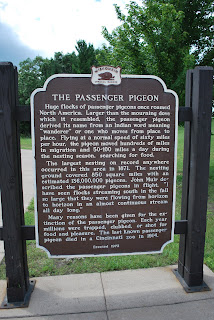 Remembering Martha and her kin
(published 9-28-10)

Advice to highly endangered bird species: Stay clear of Cincinnati. Fly around it. Don’t land. In particular, avoid the Cincinnati Zoo, my choice for the saddest place in our country’s ornithological history.

Two very special birds died at the zoo almost 100 years ago, and each had names. “Martha” was the world’s last known passenger pigeon; “Incas” was the last Carolina parakeet.

The birds were quite famous in their day, especially Martha. There was no doubt she was the last of her kind; all the wild pigeons had disappeared. So extinction was inevitable, and Martha’s final years were a death watch. When she passed in 1914, it was the end of what had been the most abundant bird species on Earth.

It was a beautiful species too, not to be confused with the urban rock pigeons we all know or the “carrier pigeons” once used to deliver messages.

Passenger pigeons resembled mourning doves only larger and more colorful. Their breast was muted orange, the head and back feathers bluish. They lived in deciduous forests throughout eastern North America.

Journals from pre-colonial times through the mid-1800s mention flocks of migrating pigeons that “blackened the skies” for hours on end. Aerial streams of more than a million birds were common. Witnesses, including John James Audubon, surely never imagined that the species would soon be just a memory.

Habitat destruction, disturbance of nesting colonies and excessive hunting and trapping are the common explanations for the passenger pigeon’s demise. There was demand for the meat, and the birds were an easy mark.

Barrels of salted pigeons were loaded onto railroad cars and shipped to market. People also killed them for sport, leaving the carcasses on the ground. The supply of pigeons seemed infinite.

Benjamin Gault, for whom a bird sanctuary on N. Main St. in Glen Ellyn is named, wrote: “During the late years, the Passenger Pigeon has become extremely rare in Northeastern Illinois, at least as far as the neighborhood of Chicago is concerned. My latest record was made at Glen Ellyn on Sunday, September 4, 1892. It was a young of the year, very tame, and unsuspicious. It was discovered in the company of some jays and feeding about the piles of dirt recently made in excavating for the foundation of a house, well within the limits of the town, and was also observed picking the grain from some fresh horsedroppings, in which occupation it was harassed somewhat by the jays.”

Ever the collector, Gault thought about making the bird his own.

“But the day, location and circumstances under which my observation was made precluded the possibility of the capture of the specimen,” he wrote.

Eight years later, a bird in Pike County, Ohio, wasn’t so lucky. A young boy shot it, ending the life of the last wild passenger pigeon ever recorded.

I’ve been thinking a lot about that bird, about Martha and about passenger pigeons in general ever since June. During a Midwestern “baseball road trip” with my son, I crossed paths with a historic marker and later a full-scale monument, each dedicated to the passenger pigeon. It was pleasing to see the pigeon’s story remembered.

We found the marker at a rest area near Tomah, Wis. I’d been wondering how the species got its name and the tablet answered my question: it derives from an Indian word meaning “wanderer.” Passenger pigeons apparently traveled up to 100 miles a day during nesting season searching for food. Acorns and chestnuts were preferred.

There is a good reason for the sign’s location. The largest nesting colony of passenger pigeons ever recorded occurred in the area, in 1871—an estimated 136 million pigeons covering 850 square miles!

A few days later I was birding at Wyalusing State Park, a beautiful spot along the Mississippi River in the dairy state’s southwest corner. My search for a Kentucky warbler failed, but I felt richly compensated by a visit to the passenger pigeon monument on Sentinel Ridge. It recalls the last known pigeon ever shot in Wisconsin, in Babcock, in September 1899.

Conservationist Aldo Leopold, who attended the dedication in 1947, said: “The monument, perched like a duckhawk on this cliff, will scan the wide valley, watching through the days and years. But no pigeons will pass, because there are no pigeons, save only this flightless one, grave in bronze on this rock.”

There are other flightless ones, of course, of the stuffed variety. You can see passenger pigeons on display at the Field Museum in Chicago and also the Jurica-Suchy Nature Museum at Benedictine University in Lisle.

You can even visit Martha. She’s mounted in a glass case at the Smithsonian in Washington.

At least there is an upside to all of this. Martha’s death brought national attention to the tragic story of her species. In turn, early bird conservation efforts in America received a jump start, leading to the landmark Migratory Bird Treaty, enacted in 1918.

The law was too late to save the passenger pigeon, but it delivered vital protection for other persecuted species.