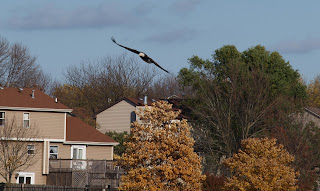 It doesn’t take much to get me thinking about eagles. The latest trigger was the cover of Audubon. It shows two sparring bald eagles, the spectacular Grand Prize-winning image in the magazine’s inaugural photo awards.

Most people love eagles, and not just birders. Is there an American over age 4 that would not recognize one? Best of all, their population is growing. The odds of seeing a wild bald eagle here in DuPage County have never been better.

Last September, at Ottawa National Wildlife Refuge near Toledo, the first bird I spotted was a bald eagle on the wing. Was this a trained bird, commissioned to greet and impress first-time refuge visitors like me? No, the bird was simply patrolling its home territory—one of several resident eagles at Ottawa.

It was also the first eagle I’d ever seen in Ohio, my home state.

As a young boy in Canton, a flyover flock of Canada geese was an exciting and somewhat rare occasion. We’d stop what we were doing to marvel at the occasional V-formation. But the chances of a bald eagle sighting were zero. In the 1970s the species was fighting for its very survival. Pesticide poisoning had pushed our national symbol to the brink of extinction.

Fortunately, some smart people acted just in time. DDT was banned in 1972, and the Endangered Species Act debuted a year later. These steps allowed bald eagles to stage a remarkable comeback that continues today. The species has been off the federal list of endangered and threatened wildlife since 2007.

On the Dec. 19 Christmas Bird Count, seven bald eagles were spotted in DuPage and eastern Kane counties. The sightings were mostly along the Fox River, but one occurred at Blackwell Forest Preserve in Warrenville.

At Greene Valley Forest Preserve in Naperville, where the DuPage Birding Club studies raptor migration each fall from the top of the landfill “mountain,” some 21 bald eagles were sighted during the 2009 count period. Three golden eagles flew over too!

Of course I dream of spotting an eagle soaring high over my yard. Hey, it could happen.

It did happen for Candace Barry outside her home in West Chicago. She encountered a baldy last October when taking pictures of the fall color. She first saw it on the ground just 50 yards away and then managed a few good photos of the bird in flight.
“I truly felt blessed to walk out and find an eagle,” Candace told me. “My dad saw one about 60 years ago in his backyard and I always thought that was a great story. I never imagined I would have my own to tell.”

Of course, for most of us, a backyard eagle is a long shot. We’ll need lots of patience and luck. But what about seeing an eagle now? We have some options.

Rather unbelievably, a few birds can be viewed this time of year at the Little Calumet River on the far south side of Chicago. They’ve been visiting every winter since 2004 according to Joe Lill of the Chicago Audubon Society. The 9th Ward, not known for its scenic beauty, treats the eagles like celebrities.

The Mississippi and Illinois Rivers are even more of a sure thing. In winter, bald eagles congregate near the locks and dams, grabbing fish where the water stays open. For anyone who appreciates nature it’s a spectacle not to be missed.

The nearest highly reliable viewing place is Starved Rock State Park in Utica, about 85 miles south of central DuPage County. For some excellent eagle watching, go to the Illinois Waterway Visitors Center between now and early March. The center is located at lock and dam #4 on the Illinois River, across from the park. More information is online at flocktotherock.com or call 800-746-0550.

Meanwhile, don’t give up on adding a bald eagle to your yard list. Broadly speaking, the birds are most definitely in the neighborhood.