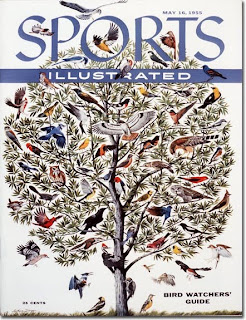 Sport or hobby? Birding is anything we choose
(published 2-7-11)

I love ESPN, even though I don’t watch it at home. It’s not part of our bare-basic cable package. But at the YMCA, when I'm using the treadmill, SportsCenter is my best friend. Especially during baseball season.

Of course there is more to ESPN than SportsCenter. On a recent Saturday the network featured a turkey shoot. The clicker was out of reach that morning so I watched.

I’m not a hunter, but I’m not against hunting either. Birding and hunting can easily coexist. In fact, one of America’s best-known birders, Pete Dunne, is also a gunner. I’m sure that he shares my admiration for the way waterfowlers support habitat management through the federal “duck stamp” program. Many birders who never lift a shotgun buy a stamp every year and I count myself among them.

So I wasn’t offended by the turkey shoot, just surprised. First of all, it didn’t seem all that sporting. In segment after segment, hunters would sneak up on a grazing bird and shoot it. Surely there is more skill involved than came across on TV.

The hunters’ reactions after taking down a bird surprised me even more. They laughed and smiled and traded high fives. Being on camera, perhaps they were hamming it up a little. But the scenes reminded me of how birdwatchers sometimes celebrate after spotting a mega-rarity.

As birders, we have more in common with hunters than we might care to admit. We don't kill, but we certainly hunt. We get up early, we go outside, we hike, we carry binoculars, we buy duck stamps and a few of us (not me!) even wear camo clothing. I’ve often thought that birders and fishermen share a few tendencies as well.

Not that it really matters, but maybe, just maybe, the hobby we love is also a sport.

Sports Illustrated once featured birdwatching on its cover. May 16, 1955. The magazine also published cover stories that year about archery, skin diving and hot-air ballooning. Dogs made the cover three times, as did the Princeton University marching band.

Earlier, in 1934, the great Roger Tory Peterson referred to “the sport of birding” in his groundbreaking Field Guide to the Birds. He added: “Field birding as most of us engage in it is a game—a most absorbing game.”

Roger that, RTP! He was talking about listing fever, of course, and the desire many of us have to see as many bird species as possible. It’s a side of birding that truly does approach the realm of sport. Annual tournaments like the World Series of Birding in New Jersey and the Great Texas Birding Classic crown teams that see or hear the most birds in 24 hours. (Such events are not just for fun; they are important fundraisers for bird conservation.)

Examples of the birding “game” needn’t be so extreme. The game, if you prefer, might be as simple as watching bird feeders from your kitchen table, keeping track of what stops by. Or maybe it’s “competing” against an existing list. I record what we see on the monthly bird walks at Cantigny Park and like to compare our results with those from the same month, one year earlier. It provides a benchmark and heightens my awareness of the seasonality of local bird populations.

So, game, sport or hobby? Call it what you wish—birding is a bit of all three. I happen to favor “hobby” because it seems broader and more inclusive. Would this column fit better in the Sports section than in Neighbor? Not in my opinion.

Birding is many things to many people, and that’s a big part of its appeal. It’s a backyard activity for some and a worldwide pursuit for others. It’s personal and social, sedentary and active, indoors and outdoors, casual and highly organized. You can be a competitive lister, a passive lister or choose to keep no lists at all. Whatever you want from birding, it’s out there.

Well, there is one thing missing. Some day I’d like to step on that treadmill and see a birdwatching show on ESPN. I’d even give up SportsCenter for that.