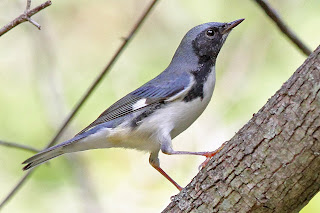 Night of the black-throated warblers
(published 10-26-10)

On weekdays I’m usually anxious to get out the door and off to work. But sometimes a “good bird” gets in the way. This occurs most often during the spring and fall migration seasons, and it happened most recently on a Monday in September.

It was a backyard brown thrasher that first caught my eye, surely the same one that was hanging around the day before. It was nice to have another look.

Of course, my distraction didn’t end with the thrasher. Sorry boss, I’m gonna be a little late. Over there was a ruby-crowned kinglet, in the same tree as a magnolia warbler. And look, a female rose-breasted grosbeak on the feeder! Don’t see that every day. The male was up in a neighbor’s tree, sounding his trademark metallic call note. Chink!

A young ruby-throated hummingbird stopped by the nectar feeder. I watched and wondered if this was the last hummer I’d see in 2010. It was September 20, after all. Drink up little fella, you have a long journey ahead.

After a half-hour I pulled myself away and left for work. But four hours later my mind was back on birds. I just had to take a little lunchtime walk. Even at noon there might be some birds around.

I’m fortunate to work in a park environment, where at certain times of the year there is very good birding less than 100 yards from my office. I’d seen not one but two golden-winged warblers during a noon walk the week before. But on this day all was quiet. Too warm, I guess. It felt like July.

The next temptation occurred around 5:20. I was about to shut down my computer and go home but decided to first check the local online birding network. There on the screen was a fresh posting about a black-throated gray warbler, a rare visitor from the western United States. The bird was discovered a few days earlier at the Elsen’s Hill unit of the West DuPage Woods Forest Preserve in West Chicago. Now it had been found again, in the same place, less than two hours ago.

So, for the third time on a Monday, I went birding.

I’d seen a black-throated gray warbler twice before, each time in Arizona. To see one here would be pretty special. A species that few people will ever see in Illinois was less than two miles from my office!

Pulling into the lot off of Gary’s Mill Drive, I was surprised to see only two cars. I parked and set off down the trail, looking for people. I needed an update on the bird and some advice on where to look. Ideally, I would find somebody watching the bird. Darkness was just over an hour away.

Up ahead I saw Marilyn and Pete. This was lucky. Both are skilled birders who really know their way around Elsen’s Hill. Pete practically lives there.

Elsen’s is not a huge preserve but it might as well be Yellowstone if you’re looking for a tiny gray and white bird. Then again, we had Pete. He’d seen the bird at 4:00 pm and several times in previous days. His knack for finding it was uncanny.

Marilyn, like me, had just arrived. Both of us were hopeful but calm. Seeing the bird would be great but just participating in the search was fun, too.

We split up temporarily to cover more ground. I stayed with Pete, and within moments we were watching a male black-throated blue warbler. If I saw nothing else this evening it was already worth the trip. The “BTBW” is an uncommon beauty.

Marilyn rejoined us about 10 minutes later and just in time to hear a singing gray-cheeked thrush, identified by Pete. It was an unusual song that I’d never heard before.

Indeed, there were now three kinds of “black-throated” warblers in play on this night at Elsen’s HIll. Blue, green and gray.

We heard and observed several black-throated greens. But the featured bird was eluding us. Pete was trying hard—way too hard for an unpaid guide. He really wanted Marilyn and me to see the black-throated gray.

Granted, I had no right to expect success in less than 90 minutes of searching. Bird chases like this require patience and often more than one site visit. Besides, Elsen’s Hill owed me nothing. A few Aprils ago it produced my second-ever Connecticut warbler and an olive-sided flycatcher—a very good day.

The magic of Elsen’s Hill is well documented. It’s a well-known hotspot for migrating warblers in the spring. I asked Pete and Marilyn about birds that they or others have seen at Elsen’s and the list is astounding. Northern goshawk, Kirtland’s warbler, pileated woodpecker, blue grosbeak, varied thrush, Mississippi kite… Each of these sightings caused a stir among local birders.

Now the black-throated gray warbler has joined this elite list of Elsen’s Hill rarities. An estimated 100 birders from all over the region came looking for the bird, and many found it thanks to Pete. Day after day he found a needle in a haystack. The warbler was still being seen the first weekend in October.

We didn’t find the bird on that balmy Monday evening. Marilyn would have a nice look at it nine days later after 13 hours of cumulative searching. I made several more short visits to Elsen’s without luck. Pete felt worse about this than me, I’m sure of it.

Sometimes you get the bird and sometimes you don’t. But the searching is always fun, and the consolation prizes along the way are pretty good, too.