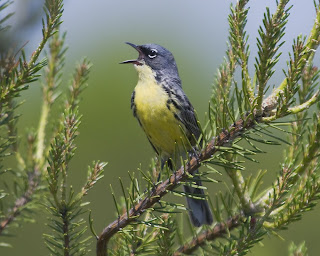 Last month’s Midwest Birding Symposium in Ohio attracted just over 800 bird nerds like me and many of the biggest names in the hobby—Kenn Kaufman, David Sibley, Scott Weidensaul, Bill Thompson and Julie Zickefoose among them.

Even Jane Alexander, the actress, gave a talk, proving that people in the public eye occasionally do come forward and confess their passion for watching birds.

The Symposium’s most notable guest, however, was a big surprise. He kept a low profile and didn’t attend the scheduled events but still created quite a stir. A Kirtland’s warbler will tend to do that.

The male bird was discovered in a park about five miles away from the convention, which took place in Lakeside, just east of Toledo. Word of the sighting spread quickly, causing many Symposium participants to “blow off classes” and chase the bird instead.

Kirtland’s warbler is our nation’s rarest songbird, an endangered species that all birders long to see. It’s actually not a difficult bird to observe, but only if you visit the bird’s primary breeding grounds in north central Michigan.

Seeing a Kirtland’s during migration, however, is a long shot. The species is virtually invisible as it travels to its winter home in the Bahamas. It’s slightly ironic, therefore, that the species was actually discovered in Ohio—in 1851, by a man named Kirtland. It took another 52 years before anyone found the warbler’s nesting territory in Michigan.

Over the years there have been occasional Kirtland’s sightings along the Chicago lakeshore, causing the local birding community to go bonkers. So you can imagine the excitement we felt at Lakeside—a rare opportunity to see a very rare bird!

I’d seen the Kirtland’s before, near Mio, Michigan, in 1999. But of course I was craving another look. And to see the species in Ohio, my home state, would be a nice bonus.

I arrived at the Symposium on Friday around noon. By then, Kirtland’s fever was in full bloom. A decision had to be made—go for the bird or go to the afternoon seminars? Having birded all morning at Ottawa National Wildlife Refuge, I elected to stay in Lakeside and enjoy the event I’d driven 300 miles to attend. Maybe this was a mistake.

Plenty of birders saw the Kirtland’s that afternoon. At dinner, the most common question was “Did you see it?” And if you hadn’t, would you be trying for it in the morning? For me the answer was easy.

So there I was the next day at 7 a.m., participating in a classic stake-out. Seriously, that’s what it’s called when birders gather to find a previously spotted rarity. Scraps of paper with handwritten notes littered the trail, each indicating the time and place where the Kirtland’s was sighted the day before. Some people who’d already seen the bird were back again, pointing to trees and shrubs where the Symposium’s guest of honor had perched just 12 hours earlier.

After an hour of waiting and searching and no bird, the stake-out began to break down. Patience was running thin, and some good breakfast spots were just down the road. The warbler, most of us conceded, was likely a one-day wonder. Unlucky for us, that day was yesterday.

Oh well, now I have a good excuse to make a return visit to “Kirtland’s territory” in Michigan. And—great news—the bird is getting easier to see! Intense and ongoing habitat management efforts are paying off big.

In 2008, the Kirtland’s warbler breeding population in Michigan was estimated to be 3,600—up tenfold from 20 years ago. Once on the brink of extinction, the lemon-breasted warbler has staged an amazing recovery.

If birders and conservationists had their way, Michigan’s official state bird would not be the American robin. Maybe Jane Alexander can have a chat with the governor.

In the meantime, make plans to go witness a Kirtland’s warbler next spring. An excellent opportunity will be the Kirtland’s Warbler Wildlife Festival on May 15 in Roscommon, Mich. You’ll see the bird and learn its fascinating story. Full details and some great photos are online at http://warbler.kirtland.edu.