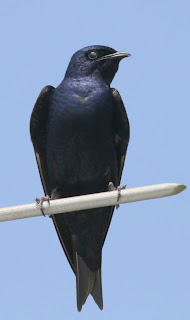 I’m pretty sure that a purple martin could poop on Ray Feld’s head and he’d just smile. Then he’d calmly wipe off his silvery scalp. That’s how much he loves these birds.

Feld, as a hobby that he admits borders on obsession, watches over three thriving purple martin colonies. The largest and oldest is at Armstrong Park in Carol Stream. The second is at the BP Naperville Complex, where Feld is employed. The third, and the one I know best, is located at Cantigny Golf off Mack Road in Wheaton.

Saying Feld watches over the birds is a big understatement. Caring for a martin colony is a lot of work. I know this better than ever having attended a presentation Feld gave at the Cantigny site in July. About 40 other birders and I listened and learned about these fascinating birds, and what it takes to maintain and grow a colony.

Purple martins are the largest swallow species in North America. The adult males are dark and glossy with a purple sheen. Young birds and females are brownish with light-colored bellies.

What really sets martins apart is their preference for man-made housing and for being around people. In a sense they are like wild pets, highly dependent on humans for their existence and preservation. To thrive, purple martins actually need “martineers” like Ray Feld.

Like bluebirds, they need specific habitat, too. Martins feed exclusively on flying insects, so nesting sites must offer plenty of open space. All the better if a pond or lake is nearby.

Still, even with the right habitat, attracting martins can take a lot of patience. This year, after 23 years of waiting, purple martins finally took up residence on Feld’s own property in Winfield. He’s still gushing about it, and rightly so.

Three years ago Feld erected a martin house at the Morton Arboretum in Lisle. Despite excellent conditions at the site, martins have yet to move in.

Success, however, was relatively instant at Cantigny Golf, a habitat Feld calls “just about perfect.” Working with golf course superintendent Scott Witte, Feld installed a martin “castle” in fall 2004. A pair of martins moved in the very next spring. “That’s almost unheard of,” Feld says.

Cantigny was thrilled too, since hosting a purple martin colony further supports the golf course’s status as a Certified Audubon Cooperative Sanctuary, a designation held since 1993. Some 55 bluebird nesting boxes are also on the Cantigny estate, monitored by Feld, his wife Cecilia, and Mike Nizetic, another Cantigny volunteer.

The martins alone require many hours of Feld’s attention from April through July. He’s one of Cantigny’s most devoted volunteers, and knows that keeping the birds healthy and safe is essential to growing the colony. That’s good for Cantigny and good for the species in general, throughout the region.

Martins are site loyal, traveling from their wintering grounds in South America to the same nesting location every spring—sometimes to the very same house compartment they used the previous year.

When the birds reappear in early April, Feld has everything ready. He’s the ideal landlord. Nest compartments are lined with pine needles to protect the birds in case of extreme cold. Baffles are mounted to the poles to guard against raccoons. Wire perch towers are positioned near the houses. And very importantly, unwanted non-native birds like house sparrows and starlings are quickly evicted.

Martins raise one brood per season, with three to seven eggs per clutch. Soon after the eggs hatch, Feld replaces the original nest with a Styrofoam insert. This reduces nestling mortality by protecting the young birds from blood-sucking parasites. The adult martins are not bothered by the nest swap or by Feld handling their babies.

Clearly Feld’s efforts are paying off. Fifteen pairs of purple martins are living at Cantigny this summer, up from 11 in 2009 and 8 in 2008. Feld keeps careful records of nesting success, too. This year, 80 eggs were laid, 59 hatched and 55 of the babies fledged. This is nearly double the number of fledglings in 2009.

A second housing unit was installed at Cantigny in 2008 to accommodate the baby boom. Feld says he may hang a cluster of hollowed gourds to provide even more nesting space for the 2011 season.

Martins begin their long southern migration this month. A few birds may hang around DuPage until late August, but your best chance to observe them is next spring. Birders are welcome to visit the Cantigny Golf colony, located across from the main parking lot. Look for the green street sign that says Purple Martin Place.