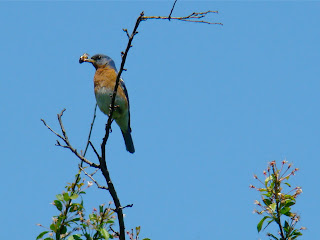 Learning more about Eastern bluebirds has been on my to-do list for years. I’ve been keeping a file on the species, reading bits and pieces, but that’s not the same as getting out there on the trail. So I finally popped the question: Will you take me with you?

Jody and Jerry Zamirowski were happy to grant my wish. The Glen Ellyn couple is among the 24 volunteers who monitor the bluebird nesting boxes at the Morton Arboretum in Lisle. They’ve been doing it since 1996—because they enjoy it, and because the birds really need them.

As recently as the early 1980s there were no bluebirds nesting in this area. They’d been squeezed out by abundant non-native bird species like house sparrows and starlings, which compete with bluebirds for nesting cavities such as abandoned woodpecker holes. With less open space and fewer dead trees due to urban development, bluebirds faced a serious habitat shortage. That’s when bird clubs, local Audubon chapters and other concerned groups stepped in to help. Their grassroots efforts have made a huge difference all across the nation—bluebird numbers have been rising steadily for two decades.

This remarkable success story is reflected at the Arboretum. Ginny Stohr, manager of the project since 2002, says bluebird boxes first appeared at the Arb in the mid-1980s, when a Boy Scout troop donated about 15 houses. Bluebirds didn’t find them immediately, but they didn’t stay vacant for long. More boxes were added for a total of 34 by 1988. Today there are 102.

It takes a lot of boxes to move the needle because bluebirds are not the only species that uses them. The entry holes are sized to keep out starlings, yet tree swallows, house wrens and house sparrows are common invaders. In fact, only three of the 10 houses on Jody and Jerry's section of the “bluebird trail” were hosting the species they were intended for.

You can tell instantly what species is using a particular box. The tree swallow nests featured gobs of feathers from other birds. The house wren nest we encountered was just a mass of little sticks, from floor to ceiling.

We didn’t find any house sparrow tenants, but if we had they would have been evicted. Other species, primarily tree swallows, are welcome to stay. Jerry and Jody informed me that bluebirds raise two and sometimes three broods in a single season. Tree swallows only raise one. So when baby swallows fledge, their nests can be cleared out, creating new space for bluebirds.

The first box we opened—by Jerry, with his trusty Phillips-head screwdriver—contained five baby bluebirds, huddled together in a tidy nest of brown grasses. It was a perfect scene, exactly what a monitor hopes to find.

The key stat, though, is fledged birds—bluebirds that hatch and survive. There were 216 fledglings in 2008, and 268 in 2007, the best year ever. In the 1990s, the average was 118. More nesting boxes contributed to the growth, along with an intensified volunteer effort.

Collecting all the data is hard work. Monitors like Jody and Jerry must check their assigned boxes at least once a week. They record the number of nests, eggs, hatched eggs and fledged birds. There's a lot of walking through high, wet grass—often to areas of the Arb that most visitors never see.

The fruit of this labor is that bluebirds—a species so beloved that there’s even a North American Bluebird Society—are now thriving in parts of DuPage County. This was unthinkable 25 years ago.

“It's birding with a purpose,” Jody told me, borrowing the DuPage Birding Club’s motto. “It's nice to go birding but it feels good to be helping the birds too.”

And she and Jerry are not just assisting Eastern bluebirds. They keep track of all the birds they see as part of a collaboration between the Bird Conservation Network and Morton Arboretum. Their observations, and those of the other monitors, have a direct influence on habitat management. For example, various open areas at the Arb are no longer mowed during nesting season for the benefit of grassland birds like bobolinks, dickcissels, meadowlarks, savannah sparrows and sedge wrens. We saw each of these species on the morning of my visit, with the exception of sedge wren, which Jerry had seen the week before.

“Just a slight modification in mowing practices can be good,” Jerry said, and he credits the Arb for being willing to manage the habitat based on real-time information provided by the bird monitors.

Not just willing, eager. Kurt Dreisilker, the Arb’s manager of natural resources, is a big fan of the bird monitoring program. The volunteers, he says, keep him well informed about birds inhabiting the grounds, supplementing his own data collection.

“They are incredibly devoted and motivated people,” Dreisilker said, speaking of the Zamirowskis. But he could have been describing any of the two dozen advocates who care so deeply about the Arboretum’s birdlife. It’s nice to see their collective efforts making such a positive difference. “Citizen science” is alive and well, just like the bluebirds.