(published 8-15-16)
There is my list, and there is Kyle’s list. When birding together, his list is always longer. The tall, quiet kid from Bellwood is a bird-finding machine.


Kyle Wiktor, age 22, is one of the “young guns” I referred to in a recent column. You know the kind. High-level birding comes to them easily, and they embrace the tough ID challenges like gulls, shorebirds, sparrows and fall-plumage warblers.
Young birders with talent are inspiring. Useful, too! I believe every bird walk should have one.
Kyle is a regular on the monthly walks at Cantigny Park. His ears, in particular, come in very handy. They look like yours and mine, but they work better. He hears stuff that most others do not, and he knows what’s making the sound. It is a learned skill, and frankly one that most birders (including me) do not work hard enough to develop.
“I got tapes and CDs that I’d listen to over and over, like while doing grade school homework,” Kyle told me. He suggests that birders who wish to improve make a dedicated effort to learn bird songs and calls like he did. Then, most importantly, practice as much as possible in the field.
I’ve witnessed Kyle’s ear-birding prowess many times, but the time I remember best happened in June 2013, at Cantigny. A small group of us were by the main parking lot when Kyle thought he heard a clay-colored sparrow off in the distance. We’d never had that species in the park before and I think it was a potential lifer for at least one of us. So we were feeling that wonderful rush of anticipation, tempered by a small dose of skepticism. Except for Kyle, none of us knew the song of a clay-colored sparrow, but we did know the odds of seeing one at Cantigny were thinner than a Virginia rail. The habitat isn’t right.
Kyle believed the vocals were coming from across the parade field, at least 100 yards away. So off we marched, following his lead. In short order we were all staring at a no-doubter clay-colored sparrow, perched high in a maple. It remains the only one ever spotted at Cantigny.
As with many things in life, it pays to start early. Kyle was 8 when he began getting “majorly interested in birds.” The decisive spark was a family vacation out West and his first looks at yellow-headed blackbird, mountain bluebird and black-billed magpie.

In 2010 the flame grew higher when Kyle was chosen to attend the annual Young Birders Event at Cornell University’s Lab of Ornithology. 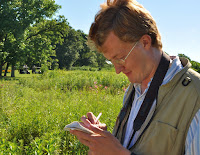 “The Lab,” situated at Sapsucker Woods in Ithaca, N.Y., is a worthy destination for all birders. Kyle soaked it all in for four days, mingling with top ornithologists and sharing his passion with nine other teenage bird geeks.
The Cornell experience included field workshops, such as bird sound recording by day and night. Kyle took to it like a catbird to grape jelly. No wonder he’s been asking about coming out to Cantigny after dark to listen for birds passing over during migration. He thinks we can add some new species to the all-time property list, like bobolink and dickcissel.

Chip notes. At night. In the dark. Yes, Kyle approaches birding a lot differently than most us. I love his ambition.
Kyle is two classes away from earning an Associates of Science degree from Triton College. He works on the seasonal grounds crew at Brookfield Zoo to help cover education costs and hopes to transfer to Southern Illinois University or another four-year school to major in Wildlife Biology.
“I know some people who are avian biologists and field ornithologists,” Kyle said. “Those sound like ideal jobs to me.”
Kyle volunteers as a bird monitor for the Forest Preserve District of DuPage County. He’s been monitoring at Pratt’s Wayne Woods since 2011, and at Mallard Lake since last year. He learned the ropes from Marilyn Bell, assisting her at West Chicago Prairie in 2010.
Two other mentors figure prominently in Kyle’s birding life. He credits Pete Moxon for opening his mind to more advanced birding, and Fillmore Dryden for teaching him the importance of getting out to check what birds are around as often as possible, in all seasons.
Dryden, profiled here a few years ago, was a local patch-birding legend, surveying McKee Marsh in Warrenville almost daily. He’s since moved out of state, but Kyle often follows in Dryden’s footsteps at McKee—one of his favorite local spots along with Pratt’s Wayne.
As you’d expect, when a rare bird shows up in DuPage, Kyle goes for it. His county list hit 250 species in May with a whip-poor-will at Naperville’s Greene Valley. No. 251 came a few days later with a prairie warbler at Lambert Lake in Glen Ellyn.
Away from DuPage, Kyle favors the Indiana Dunes region, citing its many habitat types and year-round species diversity.
Kyle’s North American life list stands at 409. His most-wanted bird is Swainson’s warbler, followed closely by black rail and chuck-wills-widow. He went to Michigan for Kirtland’s warbler in June, and on the same trip added a surprise long-tailed duck in the U.P.
Kyle told me he’s eager to visit Wisconsin’s Horicon Marsh for the first time, and also Nebraska for the massive sandhill crane migration in late March. His dream destination is Guatemala, where Kyle has a personal connection thanks to Cornell. One of his friends from that memorable week is John Cahill, son of an ornithologist, whose family moved from Pennsylvania to Guatemala when John was age 4.
“I promised John I’d visit him down there some day, even though it might not happen for quite a few years.”
It will indeed happen, I’m sure of it, just like other good things for Kyle. He is among the lucky few with a chance to build a career around his passion for birds and birding. It’ll be fun to follow his progress.