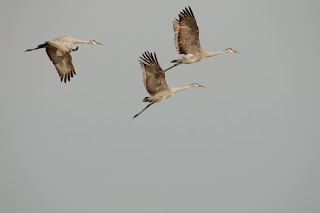 The first sandhill crane I ever saw was through a rental car window just outside of Grand Island, Neb. The huge bird was flying low, silhouetted in a soft evening sky. It was one of those “wow” moments in birding that you never forget.

I was in central Nebraska to witness one of the birding world’s great spectacles—the annual gathering of up to 500,000 sandhill cranes along the Platte River, the key stopover along their northerly spring migration. “Sandies” were everywhere, roosting on the Platte’s sandbars at dusk and foraging in surrounding corn fields by day. There was even a rare whooping crane mixed in among them, an exciting bonus for the hundreds of visiting birders like me.

That was 1998, when I barely knew a kinglet from a kingfisher. Only later did I realize that going to Nebraska in March to see my first sandhill crane was like somebody going to the Super Bowl to see his first football game. And frankly, I had no idea back then how easy it is to see sandhill cranes right here at home. November, in particular, offers prime viewing opportunities as the birds migrate south. You may not see a crane on the ground, but with a little patience you’re almost certain to see one of their noisy flocks passing over—maybe from your own backyard.

Cranes are indeed conspicuous in the late autumn sky. Extra-long windpipes serve to amplify their distinctive bugle call, so even high-flying flocks are easily heard.

One of my favorite nature writers, Scott Weidensaul, described the sandhill crane’s call as “pure magic, guaranteed to raise gooseflesh on someone hearing it for the first time.” Such reverent words are commonly associated with cranes, which are among the world’s oldest living bird species. They have an almost mythical quality about them.

I learned a few things about cranes in October when Joan Garland from the International Crane Foundation (Baraboo, Wis.) spoke at a DuPage Birding Club meeting. There are 15 species of cranes in the world, and only two occur in the United States: the whooping crane and the sandhill. Of the 15 species, 11 are endangered, the whooping crane being the most endangered of all. The sandhill is the most abundant crane and is not endangered. In fact, the species is legally hunted in the Central U.S. states. I still find that hard to believe.

With seven-foot wingspans, sandies are slightly larger than great blue herons. Unlike herons, however, cranes fly with their long necks stretched straight out. They usually travel in loose V formations, like geese, but on Indian summer days you may see them soaring in a spiral pattern. In those cases they’re riding updrafts of warm air, called thermals, just like hawks and turkey vultures do.

The sandhill cranes passing over DuPage and Kane counties this fall likely spent their summers on breeding grounds in Minnesota, Wisconsin or southern Canada. Most of them will now assemble at Jasper-Pulaski Fish and Wildlife Area in northwest Indiana before journeying on to Florida and southern Georgia for the winter.

To see cranes in great numbers, Jasper-Pulaski is the place to be from mid-October through early December. It’s the Midwest version of the Platte River spectacle, and it’s a whole lot closer than Nebraska—about 110 miles from DuPage.

I’ve only been to Jasper-Pulaski once, and it wasn’t just to watch sandhill cranes. A common crane, a Eurasian species that’s anything but common here, visited the preserve in 1999. Like a few hundred other obsessed birders, some of them self-described “craniacs,” I had to go see. Upon arrival, I’d never seen so many spotting scopes in one place. Some of the people peering through them had traveled great distances. I remember talking to a guy who had just flown in from Baltimore. Yup, just for a bird.

Whooping cranes sometimes stop at Jasper-Pulaski, too. They are all white and taller than sandhills so they really stand out. But the mass gathering of sandhill cranes (up to 10,000 birds) is reason enough to make the trip to J-P. You’ll want to be there about an hour before sunset, on the observation tower, to watch the cranes coming in to roost. Enjoy the show!