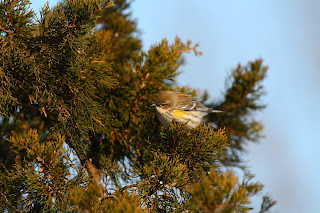 It wasn’t a Christmas Count bird—a few days late for that. It wasn’t a “lifer” either. But it was a bird I’d been waiting to see for a long time. Almost 11 years, in fact.

My last column, you might recall, featured a fine photo of a Northern shrike. I included it on a short list of birds that I’d only observed once and longed to see again. Turns out my wish came true a lot sooner than expected.

Just before Christmas I received a tip from a friend who’d been walking at McDowell Grove Forest Preserve in Naperville. He didn’t see a shrike but he told me about a birder he met on the trail that had just seen two. They were spotted in the open area on the east side of the 515-acre preserve.

Two days later I went to check it out. My hopes were high but tempered by the reality that Northern shrikes can be elusive. The species visits here only in winter and most birders go out of their way for a chance to see one. Those who succeed sometimes perform silly dances to celebrate their luck. It’s that kind of bird.

I wore my dancing shoes just in case. From the McDowell Grove parking lot I walked east to the “prairie”—perfect shrike habitat. A scan of the terrain paid off immediately. In the distance, on top of a tall bare tree, was a bird with a longish tail. Shrikes prefer high, open perches, so my heart beat a little faster. I moved in to get a better view. The bird stayed put just long enough to confirm the ID—my first Northern shrike since January 2000, when I glimpsed one for about 15 seconds at Crabtree Nature Center in Barrington.

I didn’t actually do a jig. A little fist pump maybe. Then I marched on, hoping to see the shrike again. About a half hour later it reappeared, this time on the peak of a small bur oak in the middle of the prairie. This was my best look yet of the black-masked bandit that preys upon small birds and rodents. At that moment I’m certain that Northern shrike was my new favorite bird.

A bit later I savored my good fortune over a bracing cup of joe at McDonald’s. Maybe there was something in my coffee but I found myself getting sentimental about winter birding. I thought about how some of my best memories from this hobby were born on cold mornings and afternoons when a birder’s only reasonable expectation would be a few cardinals, chickadees and juncos. I recalled the snowy owls on the Chicago lakefront, the Lapland longspurs in Kane County, and once, just once, the common redpolls that visited my backyard thistle feeder.

And then there’s Morton Arboretum, the best winter gift giver of all. I owe the Arb for my first ever saw-whet owl, Townsend’s solitaire and white-winged crossbill. And I owe my fellow birders who guided me to those birds.

Winter is indeed full of surprising avian gifts. Just a few days before my shrike hike I dropped hand warmers into my gloves and joined the Fermilab Christmas Bird Count (CBC) team covering Cantigny in Wheaton. Despite bitter conditions we found two red-headed woodpeckers—a species we never expected on December 18. Only three were seen that day in the designated 15-mile diameter count circle centered at Fermilab in Batavia.

Our Cantigny search of the park and golf course yielded 27 species. Included were eight Eastern bluebirds, five yellow-rumped warblers and one purple finch. (No partridge in a pear tree but we did tack on two wild turkeys.)

Nearly 100 other Christmas Counters were out working the trails and they too had some good stories for the evening buffet. Would you believe 20 bald eagles? Four sapsuckers? Two hooded mergansers? Three Carolina wrens? Oh, and five chipping sparrows—the first “chippies” for the Fermilab CBC since 1977!

I was surprised as well by the 33 red-winged blackbirds that were counted. Who knew they were even here in the winter? Not me.

When reviewing CBC data—all of which are turned over to the National Audubon Society—I always look for species with a “1” next to their names. These tend to be premium, hard-to-find birds. The Fermilab CBC featured seven one-timers: tufted titmouse, Eastern meadowlark, rusty blackbird, red crossbill, black-crowned night heron, sharp-shinned hawk and, yes, one Northern shrike.

Such exciting discoveries keep the thrill factor high in winter birding. Staying warm can be a challenge, and finding uncommon or rare birds is seldom easy, but the potential rewards are great. The first step is getting out there.

I posted my McDowell Grove shrike sighting on IBET, the region’s birding list-serve, which in turn motivated at least three other birders to conduct their own searches at McDowell. All three succeeded on their first try, which happened to be Christmas Eve morning. I suspect they were dancing like elves.