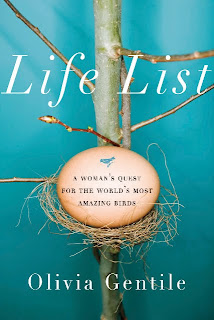 My mother, naturally a loyal follower of Words on Birds, recently chided me about the term “life list.” She said it seems to appear in all of my columns. I then reminded her that I’m a birder.

I’m also a reader, and this has been an exceptional year for books on birds and birding. Last winter I wrote about “Birdwatcher,” the new biography on Roger Tory Peterson. Today—get ready for this Mom—the topic is “Life List,” by Olivia Gentile. It’s a well-told story about the life of Phoebe Snetsinger, the first person to see 8,000 species of birds. Since her death in 1999, only two birders have surpassed her final total of 8,398. (There are roughly 10,200 known species in the world; it’s unlikely anyone will ever see them all.)

“Life List,” as you can imagine, is largely about obsession. The book’s subhead reads “A Woman’s Quest for the World’s Most Amazing Birds.” Birders eat these books up, and so do a few non-birders. There’s something compelling about stories of people who go over the edge in all-out pursuit of a passion, in this case birding. We want to know where they went and what they saw. Some, like me, want to know how they got away with it.

No birder I know can resist Kenn Kaufman’s “Kingbird Highway,” published in 1997. Subhead: The Story of a Natural Obsession That Got a Little Out of Hand. Then came “The Big Year,” by Mark Obmascik. Subhead: A Tale of Man, Nature, and Fowl Obsession. These books were about one-year bird chases around the U.S. Most recently, we gobbled up “To See Every Bird On Earth,” by Dan Koeppel. Subhead: A Father, a Son, and a Lifelong Obsession. There’s that o-word again—do I detect a pattern?

I strongly recommend the three books just mentioned. They entertain and inform, and each is well written. But “Life List” is something else—an exceptional biography in every way. I can see it appealing to people who don’t give a hoot about birding. In fact, it has all the elements to make a really good movie—perhaps the first major motion picture with a bird-theme since March of the Penguins in 2005. But that film was about birds. This one would be about birding, and a woman who took “competitive listing” to a new level.

Phoebe Snetsinger’s autobiography was published posthumously in 2003 by the American Birding Association. It was called “Birding on Borrowed Time,” a reference to the cancer diagnosis Snetsinger received at age 49. Doctors gave her one year to live.
The autobiography was essentially a travelogue—interesting in parts, a little dull in others. At least the cover was nice. It shows a male Blackburnian warbler, the “spark bird” that hooked Snetsinger on birding.

“Life List” goes a lot deeper and gets personal. Gentile contacted dozens of people who knew Phoebe well, including family members. Turns out she wasn’t as one-dimensional as some might think. She was obsessed with bird listing, certainly, and that poisoned her marriage and alienated her children. Snetsigner even skipped her mother’s funeral and a daughter’s wedding due to previously scheduled international birding trips. Ouch. But “Life List” also reveals a warm side. She was a willing teacher with a kind heart. She had many friends.

Phoebe spent her childhood in the Chicago area. She was the daughter of Leo Burnett, a giant in the advertising world. This adds yet another interesting layer to Gentile’s book.

And there are so many layers. The cancer “death sentence,” of course, and also the sexual assault that Snetsinger suffered on a birding trip to New Guinea. Even that didn’t slow her down. She continued putting her safety and health at risk while traveling the globe in search of new birds.
Melanoma never did claim Snetsinger’s life. Fittingly, she died with her binoculars on, the victim of a rollover van crash in Madagascar. She was 68.

I can’t say enough about “Life List.” It is simply a fascinating book, superbly written and researched. Every birder should read it.

Olivia Gentile will speak about her book and sign copies on Tuesday, Oct. 27, at the Evanston Ecology Center. The evening talk is sponsored by the Evanston North Shore Bird Club and open to the public. For details, visit ensbc.org.